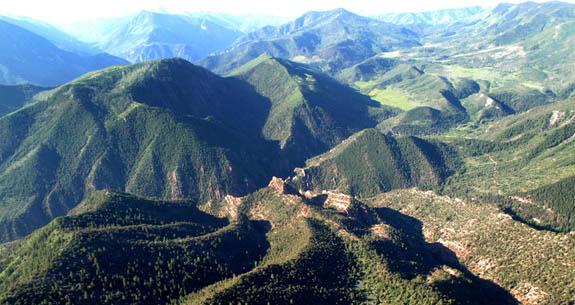 Natural Gas drilling in an area near Carbondale known as the Thompson Divide is still a possibility, despite protest from many local residents. The group trying to stop it is hopeful a Forest Service plan, due out later this summer, will prevent future drilling. Aspen Public Radio’s Marci Krivonen reports.

The Oil and Gas Leasing analysis is an update of a 1993 plan that pinpointed where drilling was appropriate on the White River National Forest. The Forest spans more than 2.3 million acres in nine Colorado counties.

The revision considers changes over the last two decades, like improved drilling technology, an increase in the demand for natural gas and an increasing rate of production on lands near the Forest. Factors like roadless areas, land ownership and endangered species also enter into the plan.

The advocacy group the Thompson Divide Coalition is focusing its efforts on the release of the Forest Service analysis. Zane Kessler is the group’s executive director.

"Now we’re really gearing up in anticipation of a forest service decision that has the potential to ensure long term protections for the Thompson Divide area from future leasing."

The Coalition’s goal is to protect the 220,000-plus acres of federal land that cover parts of Pitkin and Garfield counties. Kessler says that acreage is inappropriate for future leasing. That’s the message his group sent to the Forest Service.

"We helped to rally thousands of comments during the last public comment period on the draft environmental impact statement. We are waiting anxiously and hope that the Forest Service decision will protect the area from future leasing."

The Forest Service expects to release a final analysis next month. The plan only examines future oil and gas leasing. A separate report from the Bureau of Land Management looks at existing leases on the Forest. There are 25 of those on the Thompson Divide, which are undeveloped. The BLM will incorporate parts of what the Forest Service comes up with into their own plan. A final BLM analysis is due out in two years.

Besides the Forest Service plan, the Thompson Divide Coalition is also hopeful legislation that protects the area will move through a gridlocked Congress.

It is estimated there are 4,800 Gunnison sage-grouse left. The largest population of the species, about 4,000 birds, inhabits the Gunnison Basin.

The Bureau of Land Management wants the public to help it identify conservation measures to protect the sage-grouse on federal lands in Colorado and Utah.

The U.S. Fish and Wildlife Service recommended the BLM adopt additional conservation measures for the bird.

The comments are due to the BLM by August 22.

No Roundup Of Wild Horses For Colorado

The Bureau of Land Management will not be having a roundup of Colorado wild horses this year.

The Bureau of Land Management has wrapped up its comment period about the leases under question in the White River National Forest.

The BLM is currently running an Environmental Impact Study on some existing oil and gas leases, leases they’ve already given out.

"The BLM is looking at 65 existing leases on the White River National Forest," said David Boyd, a BLM spokesman.  "BLM either needs to adopt the Forest Service analysis, or do our own.  Back in '93, we did not do either of those, so we're we're doing this Environmental Impact Study now to address that."