As Colorado's Population Booms, Are We Ready For The Change?

"Colorful Colorado" may one day need to be referred to as "Crowded Colorado," given the number of people expected to soon move here.

Weld County's population is expected to double to half-a-million – and El Paso County will still be the largest county. It's not just the Front Range; A Rocky Mountain PBS I-News analysis of data from the state demographer and the U.S. Census Bureau shows seven of the 10 fastest growing counties will be on the Western Slope, including Eagle, Garfield and Routt.

The numbers show an estimated 7.8 million people will call Colorado home by 2040. All that growth will take a toll on the state's infrastructure as well as water and other natural resources.

"Colorado continues to attract those in the 24-35 year age group and that means there's jobs here and young people are coming from all over the country to fill those jobs," said Mark Radke, with the Colorado Municipal League.

"It shows health, if you were seeing the opposite you'd know you'd have a problem."

Growth though poses its own challenges.

Colorado's housing market is already tight. More people will likely continue to price out those who can't keep up with the real estate market. Greeley, the seat of Weld County and outside of the traditionally hot markets of the Denver Metro area or college towns like Fort Collins or Boulder, is now a city of more than 100,000 people and affordable housing is getting harder to come by. Spokeswoman Kelly Moye, of the Colorado Association of Realtors, thinks that housing affordability will catch up with us.

"So eventually our market will become not affordable for most people," Moye said. "And when companies look to bring jobs and all their employees here, they may choose another place because it's not an affordable place to live... so it's a big challenge." 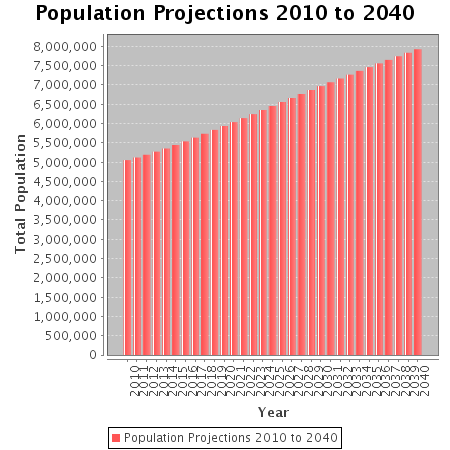 It's an existing challenge in Colorado's resort communities. Thirty-year-old Tran Pham was able to find a place to live in Telluride, but that's just half the equation. She couldn't find space to grow her Vietnamese food business, so she's moving on.

"I love Telluride; my passion to do something for myself is a little bit bigger than Telluride," Pham said. "If I was able to get a place set up here then I would totally be staying."

Most of those moving here will likely settle in more urban areas – some rural communities are struggling to stay relevant. Pockets of western Colorado and the eastern plains will stay stagnant or lose population.

John Sutherland, the city administrator of Lamar – located two hours east of Pueblo – said young people in his community are already leaving to go to areas with better job prospects.

"We've got a number of initiatives underway by people who have dug their heels in and said we're not going to allow this to happen."

Sutherland is hopeful that "attitude will win," but he isn't sure it will be enough. For Mark Radke with the Colorado Municipal League, taking on the challenge seen in Lamar will take some new approaches.

"What I've always found heartening is the inventiveness of these communities and building on what they have and making the most of that to improve their economy," said Radke.

Planning For What's Next

Change is inevitable – which is why state leaders say it's important to create long-term plans now. For example, how do we ensure enough water for those additional 2.3 million people the state expects by 2040? Gov. John Hickenlooper is promising action on that front in the newly-released statewide water plan. The governor's office also has a commission on aging and during the 2015 session lawmakers created a separate task force to study the issue.

While Colorado is among the youngest states in the country, a large group of people who moved here in the 1970s will be reaching retirement. State demographer Elizabeth Garner points out that nothing "magical happens at 65," but that change is part of the deal.

"You start switching into that non-worker, your commuting is different, your use of transportation is different your housing may change," Garner said. "Your spending changes."

Managing that change is the next challenge for a growing Colorado.

Faiza Ayesh giggles with delight as she describes her brand-new two-bedroom apartment in Oakland, Calif. She shares her home with her husband and three little girls, ages 3, 2 and 5 months. Ayesh, 30, says she just loves being a stay-at-home mom. "It's the best job in the world."

As cities in Colorado expand to accommodate a growing population, so are costs of providing services and utilities. Some communities, like Aurora, a city of 350,000 east of Denver, are reevaluating how they charge for services like water and how those costs might encourage smarter growth.

An additional 2.5 million people are expected to move to Colorado by 2040, the vast majority of them headed for the Front Range.   As part of Connecting the Drops, our state-wide water series, Maeve Conran looks at the impact on Colorado as its landscape changes from crops to houses.

The traffic on a stretch of I-25 north of Denver is the soundtrack to the changes that farmer Kent Peppler has seen happening in Weld County.

Colorado has experienced massive population growth in the last few years, a that trend is projected to continue. Finding enough water to meet the demands of the booming Front Range has city planners closely looking at how new developments can be built with conservation as a key component.

"The 2040 forecast for Colorado is about 7.8 million people, increasing from about 5 million in 2010," said Elizabeth Garner, the state demographer. "How will we deal with it? Where will we put them? How will we provide water resources and other resources, whether it takes 20, 30, 40, 50 years to get there?"