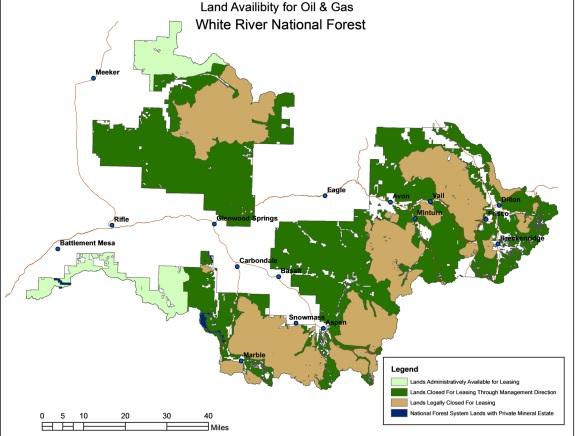 The long-awaited plan maps out where future oil and gas development can happen on the White River National Forest. The Forest covers two million acres, and includes iconic places like the Maroon Bells/Snowmass Wilderness and the Flattops Wilderness.

Work began four years ago to update a 1993 version an Environmental Impact Statement for Oil and Gas Drilling on the White River National Forest.

"This has been a long process, a challenging process and a comprehensive process," says Forest Supervisor Scott Fitzwilliams. He says the plan minimizes the impacts from energy development to the Forest’s natural character...while still providing opportunities for oil and gas development.

"This is a forest where there are high values for recreation and wildlife and its the most visited public lands unit in the entire nation, so I believe those values are both economically important and socially important."

Under the plan, more than 1.2 million acres will be closed for oil and gas leasing including much of the contested Thompson Divide area near Carbondale and Glenwood Springs. The Thompson Divide Coalition is working to protect that area. Executive Director Zane Kessler calls the plan “a good step.”

"We’re excited that the Forest Service has taken a very strong, conservation minded lead on this."

More work needs to be done, he says, because 100,000 acres already leased on the Divide won’t be affected by the Forest Service plan. The plan only applies to future leasing. 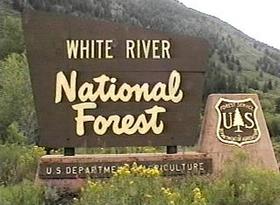 "This decision helps establish a balance that we’ve been talking about for decades," she says. "It recognizes that some areas are inappropriate for development. It also is a major victory for rural communities and for the men and women who rely on these public lands for their livelihoods and that’s crucial for Carbondale and our future."

Other local governments are weighing in. Pitkin County Commissioner Rob Ittner says “The Forest Service deserves our thanks.” And Glenwood Springs mayor Leo McKinney is urging the BLM to follow the Forest Service’s lead in its analysis of federal land in the region that’s already leased.

Not everyone was pleased with Tuesday’s announcement. David Ludlam is with the West Slope Colorado Oil and Gas Association.

"Disappointed is not quite the right word because it infers that you’re surprised and I think this is exactly what we expected," he says.

He thinks taking these acres out of play is ill-advised and the plan will undoubtedly impact how the BLM chooses to treat the 65 existing energy leases its reviewing.

"We do believe that this plan was planned to have an impact on that BLM process and we believe demographics and politics are primarily driving some of these records of decisions and not resource values. We think that some of the acreage that’s been withdrawn conveniently aligns with the political boundary that is the Thompson Divide."

Ludlam believes energy development is possible on more acreage than what’s allowed under the proposal that targeted areas with “high oil and gas potential.”

The Forest Service will take objections for sixty days before a final decision is released. The plan is temporary. It’ll get another revision in 15 to 20 years.

The Bureau of Land Management has wrapped up its comment period about the leases under question in the White River National Forest.

The BLM is currently running an Environmental Impact Study on some existing oil and gas leases, leases they’ve already given out.

"The BLM is looking at 65 existing leases on the White River National Forest," said David Boyd, a BLM spokesman.  "BLM either needs to adopt the Forest Service analysis, or do our own.  Back in '93, we did not do either of those, so we're we're doing this Environmental Impact Study now to address that."

The White River National Forest is working toward the final stages of updating its oil and gas plan.

The Forest Service is beginning the discussion about how to deal with increasing problems with crowds in the Maroon Bells Snowmass Wilderness. This summer saw huge numbers of visitors at popular spots like Crater Lake and the Four Pass Loop. As Aspen Public Radio’s Marci Krivonen reports, forest service officials are working to educate the public before exploring solutions.