Governor John Hickenlooper has apologized on behalf of the state of Colorado for the Sand Creek Massacre. The Massacre happened the morning of Nov. 29, 1864 as cavalrymen known as the Colorado Volunteers converged on a sleeping group of mostly women, children and elderly Cheyenne and Arapaho Indians. The 150-year-old event is one of the most notable incidents of violence against Native Americans in the history of the west.

"To all indigenous people and the proud and painful legacy you all represent, on behalf of the loving people of Colorado, I want to say I am sorry for the atrocities of our government that were visited on your ancestors," Hickenlooper said at the state capitol during a commemoration.

Hundreds were gathered to mark the anniversary and wrap up a four day spiritual healing run from the site of the massacre near Eads, to Denver. 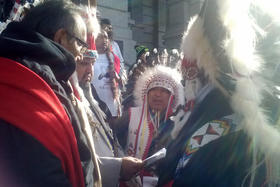 Hickenlooper called the apology long overdue. He said he didn't make it lightly, and consulted with all of Colorado's former living Governors who agreed the state should not be afraid to criticize that which is inexcusable.

"That stretches back 40 years and each one of them agrees and is spirit standing beside me," said Hickenlooper.

In addition to the Governor's formal apology, state lawmakers passed a resolution earlier this year session to commemorate the 150th anniversary.

"We've got to make sure it's a steppingstone to continue building upon relationships, and get to a point where we don't have these kinds of atrocities," said Tim Dore (R-Elizabeth), the resolution's main sponsor.

Native Americans from the Arapaho and Cheyenne Tribes in Oklahoma said the apology and state recognition mean a lot. They encourage people to visit the Sand Creek National Historic site and learn about the events of that day, and hope it helps create a deeper understanding and brighter future.

Editor's Note: This post has been updated to clarify that the soldiers involved were the Colorado Volunteers, not U.S. Cavalry.

A Native American Story That Leaves 'Feathers Or Leather' Cliches Behind

The new film Winter in the Blood is based on a landmark of literature from the American West: a novel, published to critical acclaim in 1974, about a 30-something American Indian man living in Montana. It was written by Native American author James Welch, and adapted for the screen, for the first time, by two non-Native Americans — twins Alex and Andrew Smith.

If you're so inclined, and able, you could soon speak Tlingit, Inupiaq, or Siberian Yupik in Alaska with the knowledge that those and 18 other languages, including English, are officially recognized by the state. Alaska's Legislature approved a bill giving them that status Monday.