Colorado residents have vastly different health outcomes, based in part on where they live in the state. Rocky Mountain PBS News analyzed health data from the Robert Wood Johnson Foundation to rank each of the state's 64 counties based on a variety of health indicators from obesity, to amount of exercise, to smoking and premature deaths.

Read More: Colorado's Vices And Changing Population Are Starting To Take A Toll On Our Healthy Rep

"I believe five of the 10 healthiest counties were on the Western Slope," said Burt Hubbard of Rocky Mountain PBS News. "The opposite is true on the Eastern Plains and San Luis valley. They have the most unhealthy indicators."

It's the trends though, that are starting to show the developing gaps between the state's residents.

"One of the things we did notice is the disparities between the counties have grown over the last five years, so things like the number of unhealthy days has gone up on the Eastern Plains and the San Luis Valley, but gone down on the Western Slope, so the gaps are getting bigger." 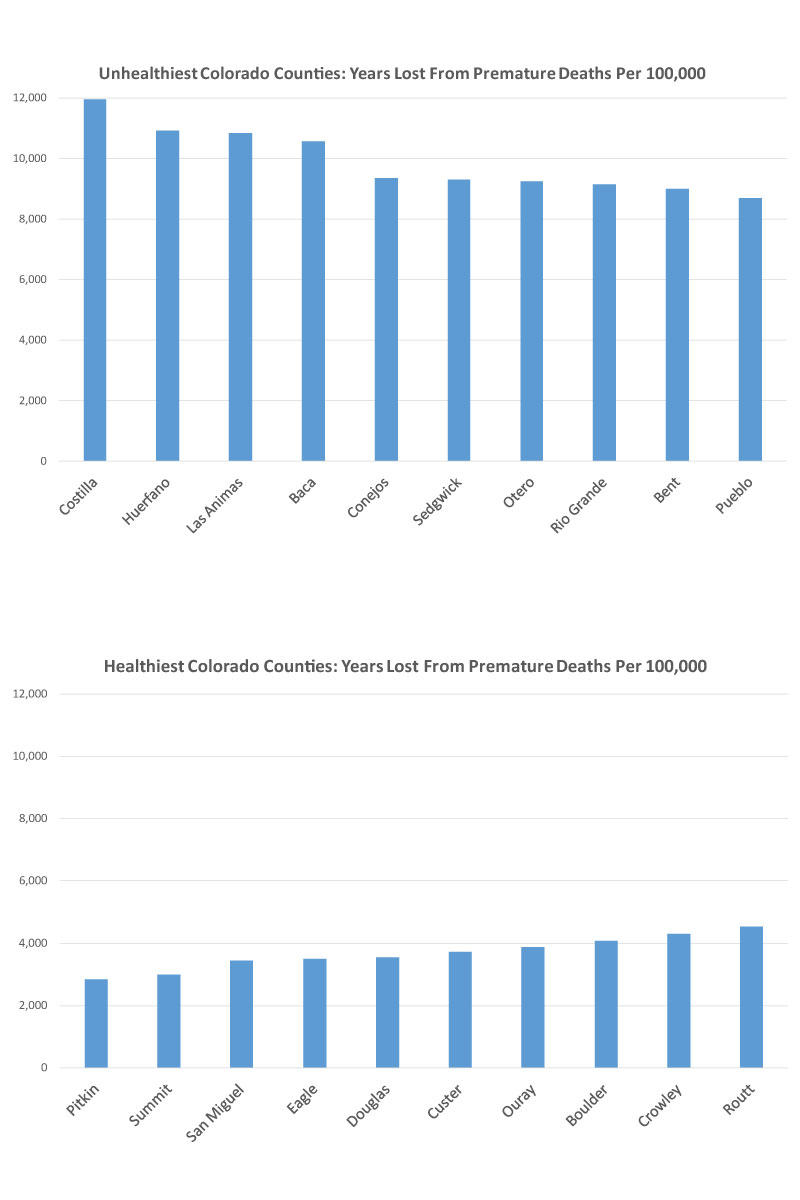 "They have a category called 'years lost because of premature death.' If you look at the range, the rate per 100,000 people, it goes from something like 5,000 up to 100,000. So it's an incredible range by county. It shows how Colorado is composed of different segments that are completely different."

"Even though Colorado is the least obese in the nation, almost all of the counties saw an increase in the percentage of people who were obese in the last five years, so you see the trends go up."

"For smoking, [we see] fewer [people in Colorado]. For drinking, there's not much of a change over the last five years. It's the drinking where the Western Slope becomes the unhealthiest part. The top 8 counties for binge drinking are all on the Western Slope. In the case of Summit County, 33 percent of adults have engaged in binge drinking. Compared to places like, Lincoln County on the Eastern Plains or Rio Grande County, which is in southwest Colorado, only 9 percent. So it's a huge difference."

A coalition in Montrose is working to create a nonprofit health center that provides physical, mental and dental services under the same roof.

The Community Dental Clinic is collaborating with the Center for Mental Health and the Delta-Montrose Technical College on the project.

Melanie Hall, the executive director of the clinic, says the new site will be called PIC Place, which stands for Partners in Integrated Care.

Smoking is still the leading cause of preventable death in the United States.

In Colorado, it kills more people than HIV, illegal drug use, alcohol, motor vehicle accidents, suicide, and murder combined. It claims about 5,000 lives in the Centennial State every year. Despite this fact, state data shows nearly 16 percent of Colorado adults smoke.

Listen
Listening...
/
3:53
KVNF’s Laura Palmisano looks at how one Western Slope county, and the state, are trying to help people quit.

Cigarette Sales Up In Colorado For First Time In A Decade

Cigarette sales in Colorado are up for the first time in nearly a decade.

The decline in cigarette sales started in 2004. That’s when Colorado voters approved boosting the excise tax on a pack of cigarettes by 64 cents.

The Colorado Department of Public Health and Environment said after that cigarette sales plummeted from around 300 million packs a year to a low of 193.2 million in 2014.

However, last year sales ticked up by 1.1 million packs.

Thousands of Americans are again searching for health insurance after losing it for 2016. That's partly because some large, low-cost insurers — health cooperatives, set up under the Affordable Care Act — are folding in a dozen states.