Join seven directors, filmmakers and subjects as they talk about the documentary films featured in this years Mountainfilm on Tour.

Featuring interviews with Maxime Moulin with his film Flow (with Sam Favret), Alex Cullen and Manny Almonte with Wood Hood, Whit Hasset with I Am Salmon, Daniel Lombroso with American Scar, Jason Whalen and Loon with Loon, Darcy Hennessey Turenne with The Ocean Solution, and Josh Izenberg and Brett Marty with Eco-Hack!

Mountainfilm in Paonia will include all seven of these films plus Stories of You and I, Finding Hetchy Hetch, and Powder Snow Hokkaido. 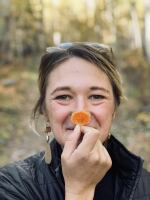 Taya Jae
The first time Taya was on the radio was a KVNF pledge drive promo recorded in 1998, she was 5. It went something like this, “I like KVNF because it’s fun to listen to music” she goes on to say, “music is like a dream”.
See stories by Taya Jae
KVNF 2 Week Music Archive
of KVNF's locally-produced music programs. Miss your favorite show? Want to hear one again? Find it on-demand here!
The Archives
DONATE YOUR CAR!
Sign Up!