There Are Jobs In Ag, There’s Just Not Enough New Grads To Fill ‘Em

Close to 60,000 jobs are set to open up in agriculture, food and natural resource sectors each year for the next five years, according to a report from Purdue University and the U.S. Department of Agriculture.

The American agriculture industry has a problem though; there are not enough grads to fill those jobs. The report projects about two open jobs for every qualified graduate. That’s left the USDA, land grant universities and private industry scrambling to try and bridge the gap. 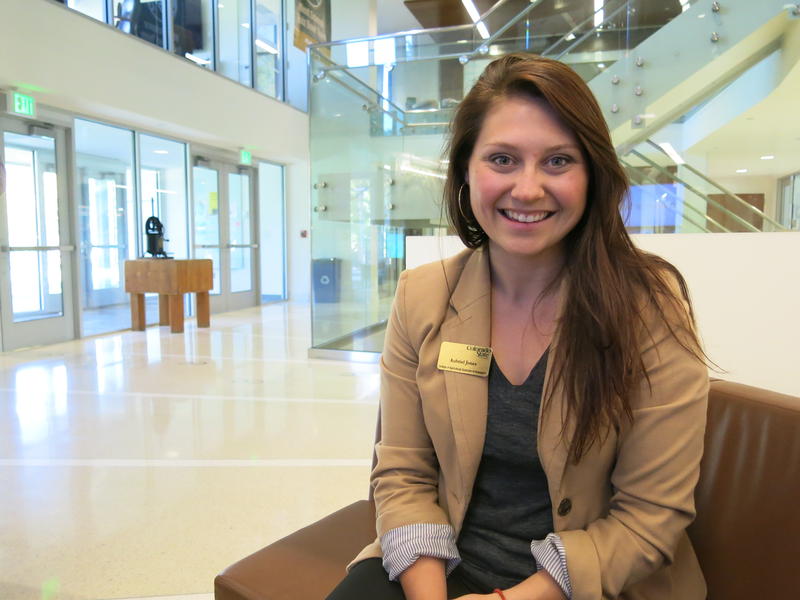 But it’s way more than that. Ask what she’s actually studying, and it’s a mouthful.

“My major is agricultural literacy,” Jones says. “I have a minor in global and environmental sustainability and another minor in agricultural and resource economics.”

With agricultural degrees in such high demand, that combination likely sets Jones up for a pretty easy job hunt when she graduates.

“I mean, it’s very encouraging,” Jones says. “I think it’s amazing that those numbers are rising and so that gives more opportunities.” 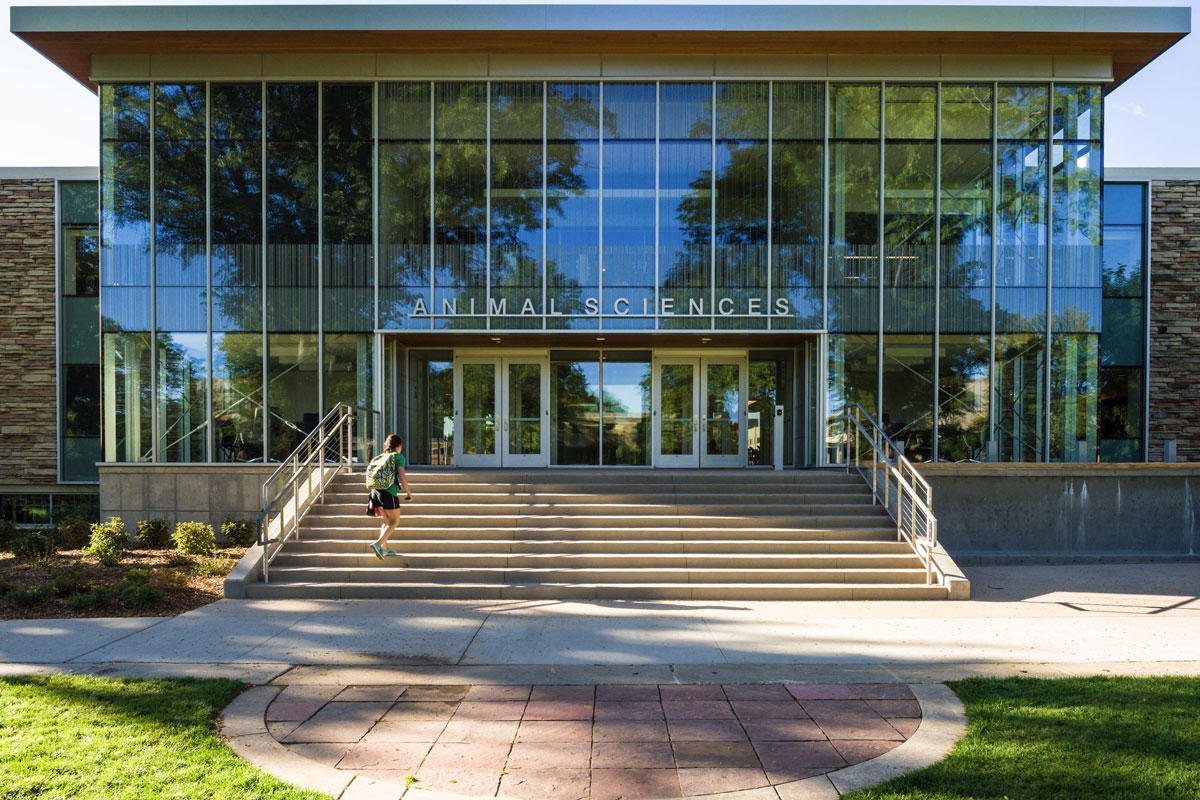 CSU is Colorado’s land grant university, institutions originally established in the 1800s to teach agriculture, science and engineering to eager students. Kevin Pond, head of CSU’s department of animal science, says while enrollment in his department is steadily rising, the vast number of vacant jobs in agricultural and food sectors is partly due to perception. Young people don’t think of it as a growing field, or an area with sunny job prospects, even though it’s common for animal science graduates to come out with multiple job offers.

Students, even at this land grant university, are increasingly urban. Most don’t come from a farm background.

“The truth is, in animal science, it’s 80 percent female, it’s 90 percent urban and our new minority is a white male from a rural background. Crazy to think,” Pond says.

The stereotype of the farmer in manure-covered overalls driving an old tractor still exists, Pond says. Helping prospective students see ag as a modern, potentially lucrative field of study is part of the school’s sales pitch. Job openings are highly-skilled and a lot of times they’re at Fortune 500 companies in marketing, food safety, plant science and veterinary medicine.

“It’s no longer menial labor that’s at a low salary,” Pond says. “Their salaries are going up and up and up because of the scarcity.”

Agriculture programs at land grant universities are focusing on science in a bid to stay relevant, even as it takes fewer people to run farms and ranches.

“If you have 1 percent of your population feeding the other 99 percent, if we’re relying on that pool to fill our classrooms we’re going to be a dying college, ” Pond says.

Some of the onus should be placed on private industry, says Krysta Harden, deputy secretary at  the U.S. Department of Agriculture. Food and agribusiness companies need to do a better job wooing students and working with public universities.

Part of the problem in filling these jobs is location, Harden says. Many recent college grads look to major cities for their first jobs, not the rural Midwest.

“Even our mega big agribusinesses are often in smaller cities and rural locations and the jobs they have may be out in a grain elevator or a buying point or smaller city and so how do you attract young people?” 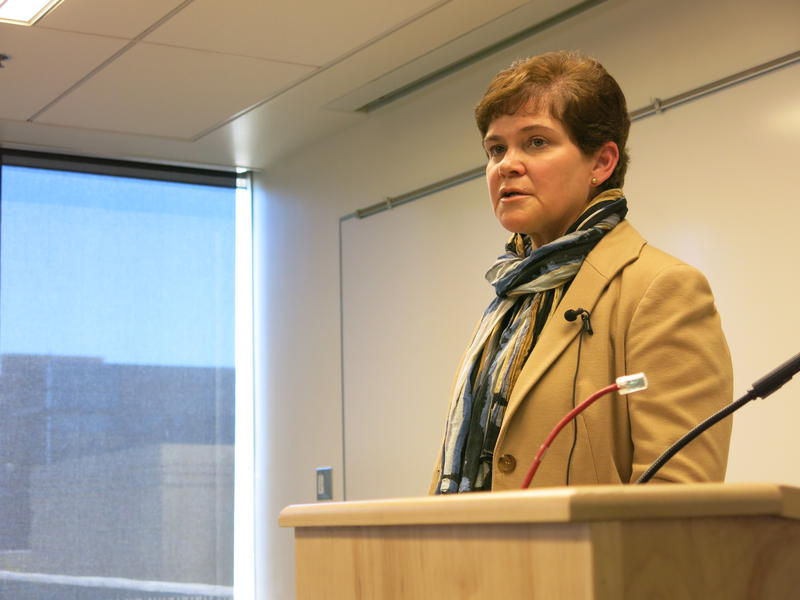 It gets even harder when you’re attempting to build a diverse company in rural America.

“It’s very difficult for diverse folks,” Harden says. “They may be the only African-American family in Decatur, Illinois. How do you say that this is a place to talk them into coming?”

Colorado State University senior Aubriel Jones is already being recruited. But her passions are in local food and organic agriculture. So when food giants like Tyson or ConAgra come knocking, she’s less likely to hear their pitch.

“Honestly I feel like the businesses and industries that have come to me are ones that I’m not particularly interested in. They’re mostly the large ag industries,” Jones says.

That mismatch in values, where big equals bad to the millennial ag job seeker, is part of what’s leaving large food companies with vacant jobs. Even as food remains a hot topic and cultural flashpoint.

Those same friends who think all she does is study corn? Over the years at CSU, they’ve come around.

“The thing I’ve really noticed about my friends over the past couple of years is that they’re becoming way more interested in the food that they’re eating than they were at the beginning,” Jones says.

It’ll take a lot more of those friends turning a casual interest in food into a degree in agricultural science to eventually fill the gap.

As Colorado's Population Booms, Are We Ready For The Change?

"Colorful Colorado" may one day need to be referred to as "Crowded Colorado," given the number of people expected to soon move here.

Weld County's population is expected to double to half-a-million – and El Paso County will still be the largest county. It's not just the Front Range; A Rocky Mountain PBS I-News analysis of data from the state demographer and the U.S. Census Bureau shows seven of the 10 fastest growing counties will be on the Western Slope, including Eagle, Garfield and Routt.

The numbers show an estimated 7.8 million people will call Colorado home by 2040. All that growth will take a toll on the state's infrastructure as well as water and other natural resources.

When The Alpaca Bubble Burst, Breeders Paid The Price

Known for their calm temperaments and soft fleece, alpacas looked like the next hot thing to backyard farmers. The market was frenetic, with some top of the line animals selling for hundreds of thousands of dollars.

But the bubble burst, leaving thousands of alpaca breeders with near-worthless herds. Today, craigslist posts across the country advertise “herd liquidations” and going out of business deals on alpacas, some selling for as low as a dollar.

It’s just one more chapter in a long line of agricultural speculative bubbles that have roped in investors throughout history, throwing money at everything from emus to chinchillas to Berkshire pigs to Dutch tulips, only to find themselves in financial ruin after it bursts.