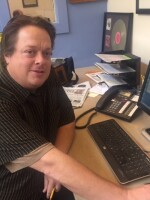 Eric Goold
Eric Goold moved to Paonia in 2008. His career as a journalist spans more than 15 years, mostly as a sports writer for both daily and weekly newspapers in four different states. His background in radio began at KVNF in 2012 when he became a volunteer DJ hosting the Emotional Rescue show. He did a stint as KVNF's morning news host in 2014 and came back in 2016 to host Morning Edition as well as produce and host KVNF's Regional Newscast.
See stories by Eric Goold
KVNF 2 Week Music Archive
of KVNF's locally-produced music programs. Miss your favorite show? Want to hear one again? Find it on-demand here!
The Archives
DONATE YOUR CAR!
Sign Up!