John McKay, a plant geneticist at CSU, leads the team studying the 17 varieties of hemp on this test plot. The corn field border is meant to keep curious hemp enthusiasts from snooping around, and disrupting the experiments inside. 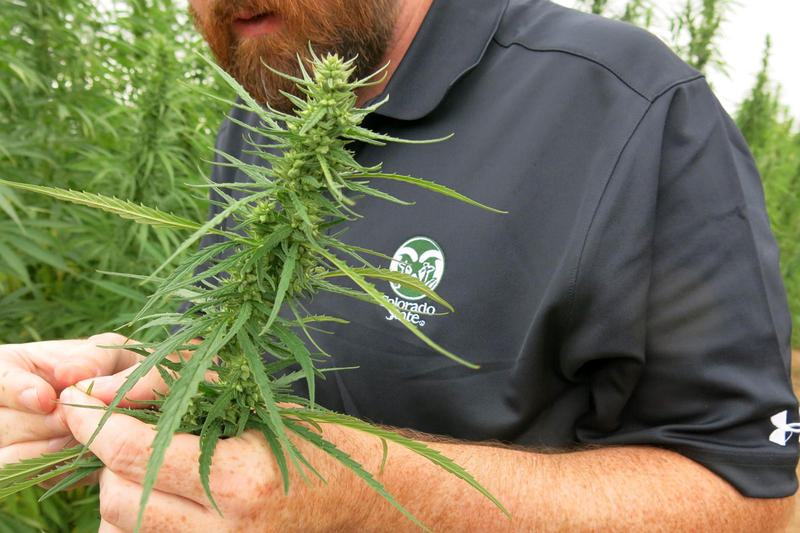 “From the scientific side we’ve tried to keep people out of all of our experiments,” McKay says. “Because they’re going to knock seeds off of plants and interfere with the data. And this experiment, people are more interested than anything else I’ve done.”

McKay and his graduate student, Brian Campbell, weave through the corn stalks, eventually coming upon a half-acre of deep green hemp stalks.

Campbell has a huge smile on his face as he explains what’s happening inside this corn field.

“My background has been in alternative oilseeds so this is kind of like the king of alternative oilseed crops,” Campbell says. “So it’s been an exciting summer for me personally just to get to work with something that hasn’t been done to death, like corn.” 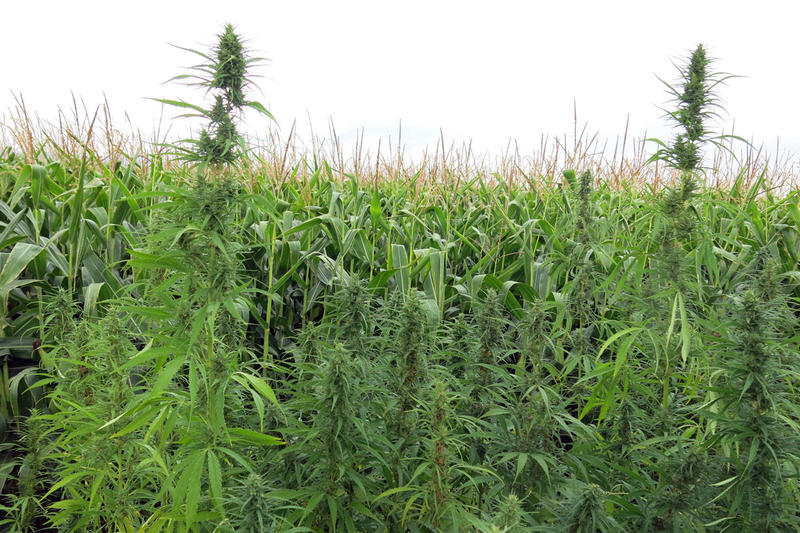 The juxtaposed corn offers a glimpse into what hemp’s future could look like. The hemp field is a messy tangle of plants, ranging in height, stalk thickness and hardiness. The neighboring corn is uniform, sturdy, in neat and tidy rows thanks to centuries of breeding and research. The hemp’s varietal variability is what surprised John McKay.

“So if you look closely in each of the plots,” he says. “There’s quite a bit of variation from plant to plant and it looks like some of that is still genetic variation. If you look over there at the corn it’s extremely uniform.”

A more concerted breeding program could turn hemp from a much-hyped mystery into a full-blown commodity, McKay says. Imagine combines and tractors roaming over fields of hemp. But until then, variation among the crop will make it tough to monetize, and to pitch to pragmatic farmers. 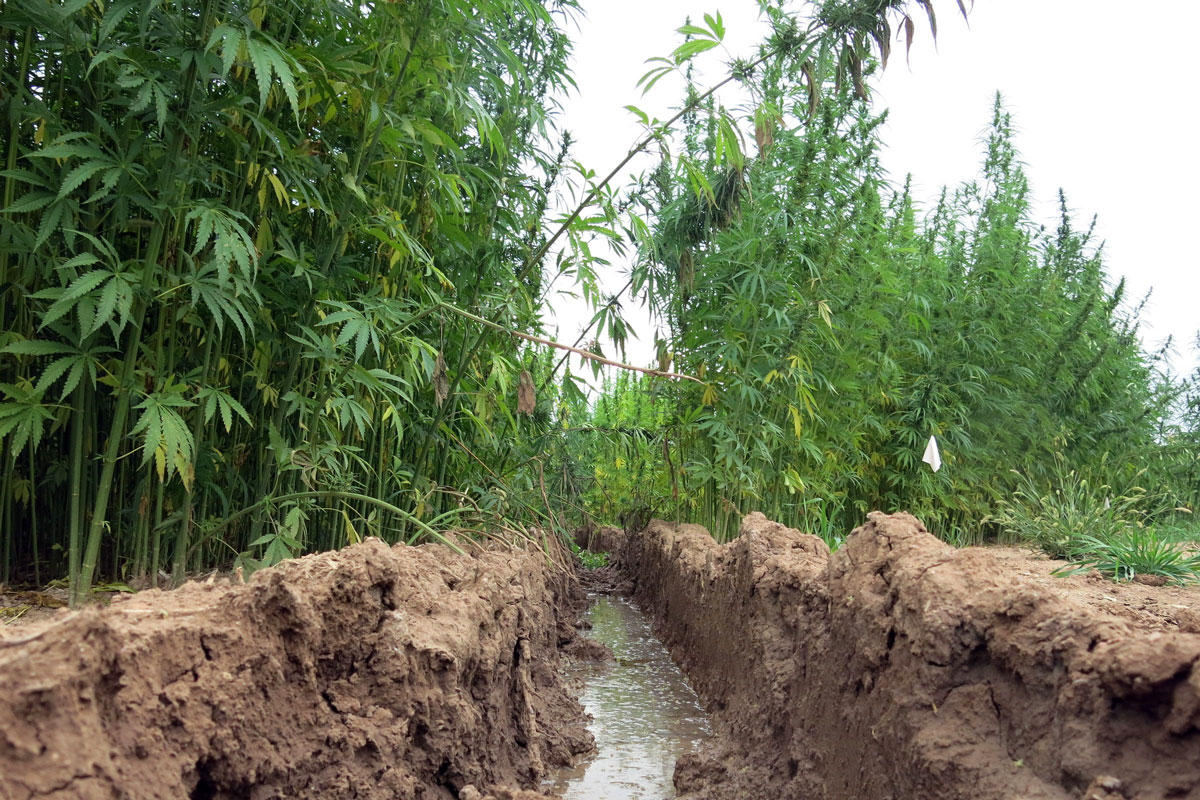 One Chinese variety, grown for fiber production, towers overhead at 10 feet tall. Others, from Italy and Romania, are short and bushy, laden with seeds. The crop trial is designed to see which varieties grow best in Colorado. Another test plot in southwestern Colorado is part of the project.

“When you’re growing a fiber variety you want it to go as long as possible before flowering so you get all the stalk biomass,” Campbell says. “I mean down here you can see some of them are much thicker than a thumb.”

Hemp is enjoying a resurgence in popularity. The once-banned crop is popping up on small plots of land across the country. Laws have been loosened in the last year to allow experiments like this one. Even with the more lax regulations, it took months to get research projects off the ground due to funding problems and interference from federal drug enforcement officials. 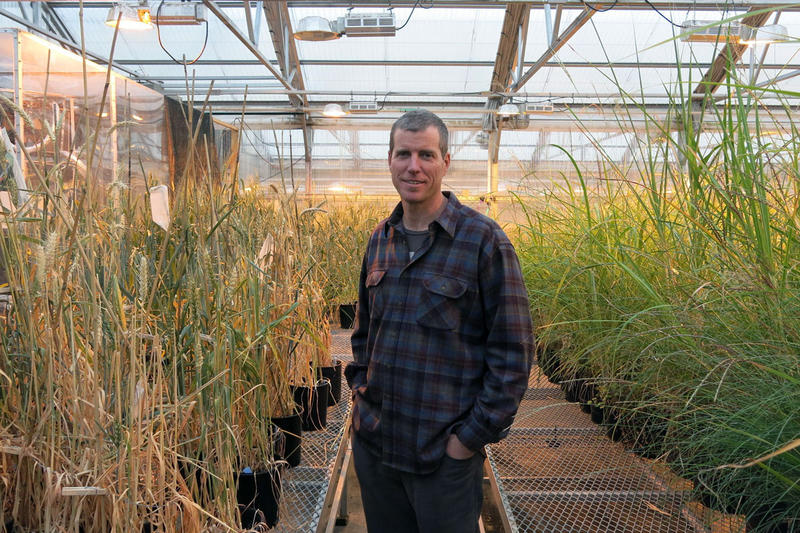 Hemp-based foods have taken off, same with body care products that use the plant's oil. Some of its lesser known compounds could be used as medicine. But there’s little scientific research published about hemp because of decades of prohibition, which is why CSU got involved, McKay says.

“This has been, just in terms of how to plant it, what to expect and when, it’s been a fairly seat of the pants operation. As opposed to the other crops we’ve been doing for years,” McKay says.

This experiment, which began when a seed shipment from Europe to Fort Collins cleared customs, has brought a certain amount of chaos to the usually quiet plant science department at CSU. McKay has endured hours of meetings with university lawyers, a rarity for the research who usually focusing on benign crops like rice and camelina.

As experiments like this take off and mature, and the results are rolled out to farmers, the end result could be a different agricultural landscape in Colorado, with some of the state’s amber waves of grain turning emerald green.

A federal bill to legalize industrial hemp farming has the backing of a Colorado Congressman.

The Industrial Hemp Farming Act of 2015 was introduced in the U.S. Senate last week.

The bill would remove industrial hemp from the marijuana definition in the Controlled Substance Act thus allowing farmers to grow it.

Colorado Republican Sen. Cory Gardner is one of the bill’s co-sponsors.

Hemp's Legality Has Stunted Research, But That's Starting To Change

Humans have been growing hemp for centuries. Hemp-based foods have taken off recently. So have lotions and soaps that use hemp oil. Studies underway now are examining how different compounds in cannabis could be used as medicine. There’s hope its chemical compounds could hold keys to medical treatments for Parkinson’s disease and childhood epilepsy.

Scientists studying industrial hemp say the plant holds a tremendous amount of promise. But to unlock its potential there’s very basic scientific research to be done.

Concern Grows Over Unregulated Pesticide Use Among Marijuana Growers

The marijuana industry has a pesticide problem. Many commercial cannabis growers use chemicals to control bugs and mold. But the plant's legal status is unresolved.

The grow room at Medical MJ Supply in Fort Collins, Colo., has all the trappings of a modern marijuana cultivation facility: glowing yellow lights, plastic irrigation tubes, and rows of knee-high cannabis plants.

Is Colorado Primed To Become The Silicon Valley Of Agriculture?

Colorado is famous for its beer and its beef. But what about its farm drones?