“Our diversity and differences are a source of strength and we are here united for one goal to diligently act as public servants,” said Carroll. “I have every reason to believe we can and will work together.”

Carroll’s comments were a reflection of last year’s contentious session – but she says lawmakers can take pride in what they accomplished.

“Last session was a busy and productive session and much of what we actually worked on was eclipsed by marijuana and guns in the major headlines,” Carroll said. “And while D.C. was criticized for doing too little, some questioned whether we in Colorado did too much.” 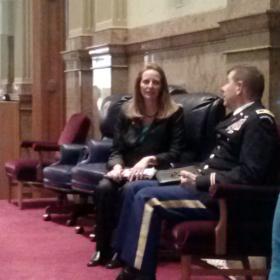 Senate minority leader Bill Cadman (R-Colorado Springs) says 2013 was also difficult year because of devastating wildfires and floods, and senseless shootings. He added though, that in many ways the Senate failed to do its duty to the public.

“Recalls, lawsuits, secession, the formula is wrong. Democrats divided by Republicans does not produce outcomes that are representative of Colorado,” said Cadman. “In addition to the historic events that formula produced a hyper-partisan toxin that effected this institution, the people who visit and those who serve here. We did start to look like Congress.”

With lawmakers heading into an election year, working together could be a tall order for both parties. Democrats hold a one-seat majority in the Senate and a larger majority in the house. Governor Hickenlooper is also up for re-election.

A Look Ahead At The Upcoming Legislative Session

Going into the 2014 legislative session, Colorado Democrats are still in the majority at the capitol. With an election year looming, party leaders – including Senate President-elect Morgan Carroll – say they want to focus on creating more jobs.