iSeeChange Featured on This American Life

KVNF's beloved Julia Kumari Drapkin has produced a feature for the popular radio program, This American Life, which can be downloaded and podcasted started Sunday, 5/19/2013 at 6pm.

This American Life is a weekly public radio show broadcast on more than 500 stations to about 1.8 million listeners. It is produced by Chicago Public Media, distributed by Public Radio International, and has won all of the major broadcasting awards. It is also often the most popular podcast in the country, with around 850,000 people downloading each week.

Drapkin tells the story of Colorado’s State Climatologist, Nolan Doesken. Doesken has long believed the humans are driving climate change, but never connected it to his own life. Even after several years of some of the most devastating weather his state has ever seen, Nolan considered climate change a worry for the future. Then, last year, he watched as his state experienced some of the most extreme weather it ever has. For the first time, Nolan felt like he was looking at what the future would be like where he lives. He felt scared. Julia tells the story of how this has all changed Nolan, and changed what he’s saying to the people of his home state.

Julia is the lead producer of iSeeChange at station KVNF, funded by Localore, AIR and CPB. The online almanac she created, thealmanac.org, is a place for the community, scientists, journalists, public resource managers and YOU to post observations about the environment. Submit your stories, images and more. 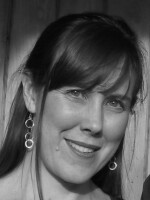 Christy Eller
Christy developed the current KVNF website. She maintains the digital presence of KVNF on the website and social media, and serves as IT director. She has lived in and loved the North Fork Valley for 17 years, and was co-owner of the Internet service Paonia.com for many years. You can see more of Christy's design work at IamChristyEller.com.
See stories by Christy Eller
KVNF 2 Week Music Archive
of KVNF's locally-produced music programs. Miss your favorite show? Want to hear one again? Find it on-demand here!
The Archives
DONATE YOUR CAR!
Sign Up!
Related Content