As the Worm Turns 2013: Tips from Lance, the Gardener

Listen to all the invaluable tips from local gardener, Lance Swigart, from the 2013 growing season.

Lance  joins Donna and Patrick on Monday mornings through the growing season to share what's important in the garden this week.

Monday, Nov. 4th - Fall cleanup continues, plus preparing beds that will be used for spring planting.

July 15- Lance tells us to plant beets, carrots and peas for a fall harvest and also for seed stock. He describes how to thresh and winnow peas, and tells us he is still watering despite the monsoon rains.

July 1 - Stopped watering garlic for harvest - what to look for to know ready for harvest, thinning carrots, grapes react badly (rust vs. mildew, signs of insufficient watering), know your potatoes.

Seed potatoes - planting potatoes for seed next year.  grows them like regular potatoes but picks the medium size taters for seed - choosing those that are the furthest and deepest from the stalk.  He also recommends not washing or cleaning the seed potatoes to prevent any kind of damage to skin = store in the state that they come out of the ground with. 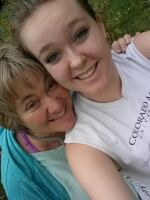 Donna Littlefield
My love of music began with seeds from my parents' music collection - most notably, Marty Robbins, Bill Haley and the Comets and Elvis and then grew into an eclectic array of musical interests. Attempts to play music led to cutting a piano album (along with 100 other students and 50 pianos - playing in unison) as well as being requested to step out of the 5th grade choir (tone deaf) and play accompaniment instead of singing along.
See stories by Donna Littlefield
KVNF 2 Week Music Archive
of KVNF's locally-produced music programs. Miss your favorite show? Want to hear one again? Find it on-demand here!
The Archives
DONATE YOUR CAR!
Sign Up!